As discussed in the last edition of The Five Star Standard, OPEC agreed to production cuts lead primarily by Saudi Arabia.As I noted, it was a bit of an uneasy truce and agreement among OPEC members.But as also noted in prior articles, Saudi Arabia took the laboring ore.

OPEC was originally scheduled for an extraordinary meeting in Vienna April 17-18th.However, a ministerial panel decided to cancel that meeting and not assess the impact of production cuts until its regularly scheduled meeting at the end of June. ( https://www.reuters.com/article/us-oil-opec-falih/saudis-falih-opec-may-cancel-april-meet-but-hold-steady-on-oil-output-idUSKCN1QZ0KN). Simply put, OPEC feels that the data won't be sufficient in April to make a determination on whether to lift the output restrictions and whether or not the market has re-balanced.The big issue will be the May 4th decision by the United States on whether to extend the Iranian oil sanctions and the effect of the U.S. sanctions on Venezuela.

But I really wanted to see how the data came in before drawing conclusions.And so far, it is positive.

In its monthly report, OPEC said its January oil output fell almost 800,000 barrels per day to 30.81 million bpd. That is still slightly more than the demand OPEC expects for its crude on average in 2019.

But February has been even more promising: OPEC oil supply fell to a four-year low, a Reuters survey found, as top exporter Saudi Arabia and its Gulf allies over-delivered on the group's supply pact while Venezuelan output registered a further involuntary decline.

The 14 OPEC members pumped 30.68 million barrels per day (bpd) in February, the survey showed, the lowest OPEC total since 2015, according to Reuters surveys. January's total of 30.98 million bpd was not revised.

The biggest drop in supply came from Saudi Arabia, OPEC's biggest oil producer, which pumped 130,000 bpd less than in January.

Saudi supply had hit a record 11 million bpd in November, after President Trump demanded more be pumped to curb rising prices and make up for losses from Iran. OPEC and the kingdom changed course as prices slid on the prospect of oversupply in 2019.

The second-biggest drop occurred in Venezuela after the U.S. imposed sanctions on state oil firm PDVSA in January, slowing exports. Output in the country, once a top three OPEC producer, has already been in decline for years due to economic collapse.

Kuwait and the United Arab Emirates also delivered larger cuts than required under the deal, while Iraq, a laggard on compliance in the last round of cuts, reduced supply with southern and northern exports edging lower.

Production in Libya was little changed as unrest kept the country's biggest oilfield, El Sharara, offline for a month.

Iran managed a small boost in supply as some customers increased purchases due to waivers from U.S. sanctions, according to tanker data and industry sources.

Nigeria trimmed output but is exceeding its OPEC target due to the start-up of Total's Egina field. Small African producers Gabon and Congo are also pumping more than agreed levels, the survey found. 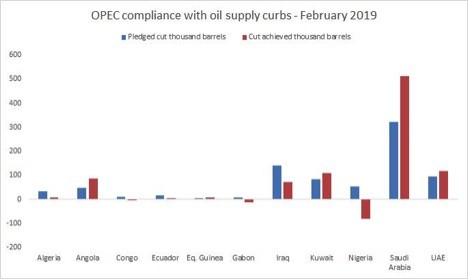 While Saudi Arabia is the undisputed king of the OPEC+ coalition, Russia remains a predominant force in world oil supply.As we have noted before, Russian compliance with promised cuts, historically, has not been great.Nevertheless, in the last real crisis, Russia had substantial compliance.

For the 1.2 mbpd output cuts, OPEC+ used October production numbers. Russia pledge was 228,000 bpd.Russian Energy Minister Alexander Novak said that Russia cut its oil output by 97,000 bpd in February from October. He has said Russia would reach its reduction target during the first quarter.

But interestingly, there is a lot of headwinds facing Russian compliance.According to a February 05 article in Reuters article, Igor Sechin, head of Russian oil giant Rosneft and one of Vladimir Putin's closest allies, has written to the Russian president saying Moscow's deal with OPEC to cut oil output is a strategic threat and plays into the hands of the United States.While Mr. Putin is the obvious decision maker, this letter might go a long way to swaying his opinion in the next round of cuts.

However, there are competing viewpoints in Russia – that believe any price below $40 does not diminish U.S. production and a price below $40 is substantially detrimental to the Russian economy: thus, better to do the deal.

Overall, OPEC+ compliance is based largely on Saudi Arabia's willing decision to cut and Iran and Venzuela's involuntary cuts.Russian compliance is probably better than predicted given the headwinds it.

I am strongly encouraged to see Saudi Arabia, who has much more ability than most to turn on and off the tap, continue to take lead in stabilizing global commodity pricing. And I hope they continue to do so.

Be sure to read this week's Ty's Take for my full conclusions and analysis.