In this article, we look at two things: the state of the U.S. economy as a whole and what we see developing in oil markets.

The state of the U.S. economy is a key driver of oil demand.Stubbornly, oil markets have finally moved back into backwardation (meaning traders finally believe that by the end of the year, there will be more demand than supply).However, we are barely in backwardation and the overall state of the World economy and the U.S. economy will play a dramatic role in determining how quickly rebalance will happen.So in this article, we will look at key economic indicators as well as some recent news that might affect oil pricing and demand for oilfield services.

So let's first look at some of the data points on the U.S. economy as a whole. And it's a bit troubling. 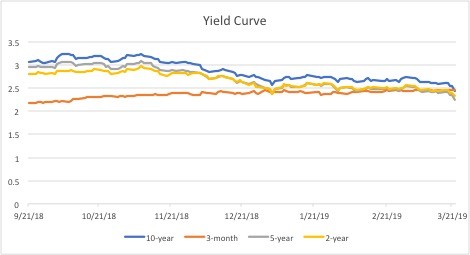 This trend becomes even more pronounced when one looks over the last two months: ​ 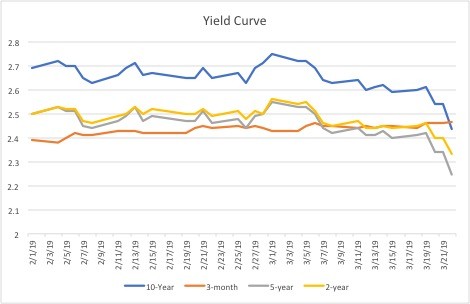 This inverted yield curve signals potential economic duress.However, how concerned one needs to be at this point is a matter of some debate.

Durable goods orders seem to be slowing.That is an overall trend has shown a deceleration since August 2018.

In addition, the Chicago Fed's National Activity Index appears to be slumping: 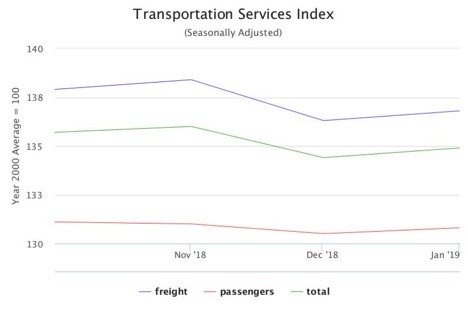 While not the principal subject of this article, the World economy certainly impacts the U.S. economic outlook.And the World economy is showing every sign of continued slowing, if not outright recession in some places.

China's manufacturers reported falling activity for the third month running. The official purchasing managers' index fell to 49.2 in February, down from 49.5 in January, and the lowest for three years. Manufacturing activity has been decelerating since the middle of 2018 and is now falling outright.

Globally, purchasing managers' indicators show new export orders have been losing momentum since the start of 2018 and have now fallen for five months in a row.

Air freight indicators also point to flat-lining or falling volumes in 2018 after strong growth in 2016 and 2017, but do not yet show the large falls associated with the last two recessions.Air freight handled through Hong Kong's International Airport, the busiest air cargo hub in the world, was down by -7% in the three months December-February compared with the same period a year earlier, the worst decline for seven years.

World Trade volumes fell -1.7% in December after declining -1.8% in November. Trade volumes in the three months Oct-Dec were just +1.4% higher than in the same period a year earlier, confirming the abrupt slowdown in global trade momentum.In February, IHS Markit released its most recent report on global PMI numbers, titled, "Worldwide manufacturing growth close to stalling as trade flows deteriorate.The tracker fell to a 33-month low, after hitting its lowest in 27 months in January.

The United States still maintains a healthy economy.But:we are at an interesting point.The U.S. government pumped up the economy in 2018 by taxing less, spending more, especially on defense, and boosting borrowing, but it probably cannot repeat the same stimulus in 2019/2020.

As the fiscal stimulus from last year fades, economic growth is set to slow, especially in the manufacturing sector, which has been a major beneficiary from higher defense spending.

The federal government's receipts from taxes, social security contributions, customs duties and other items fell by 0.4 percent in 2018, as reduced tax rates more than offset the impact of an expanding economy.

Federal revenues have recently been growing at some of the slowest rates outside recession periods in the last four decades,

At the same time, government spending has continued rising at a rate close to its long-term average, with federal outlays increasing by more than 4.4 percent last year compared with 2017.

The result has been a massive fiscal stimulus in an economy already well advanced in the business cycle with unemployment at multi-decade lows and limited spare capacity.

And the U.S. economy has been firing on all cylinders.So a slowdown is not necessarily something to be overly concerned with.I simply wanted to show you what was trending.

But…Good News Out of the Permian

First and foremost: both Exxon and Chevron have revised up their spending budgets -and at least a portion of those budgets will be directed to the Permian basin.

This month, Exxon and rival Chevron released dueling Permian output projections. Exxon said its Permian production could hit 1 million barrels of oil and gas per day as early as 2024, up from its previous estimate of 600,000 by 2025.

Interestingly, Exxon also expects to be able to be profitable in the Permian Basin even at lower oil prices, saying it can earn an average return of more than 10 per cent there even with crude at $35 a barrel.

But the Parent-Child Relationship Isn't Rosy

But, there may be a hiccup.Shale industry companies began drilling newer wells closer to older, existing wells in an effort to drive down costs.Industry experts claimed that doing so would reduce costs without any loss of production from the newer wells or older wells.This is known as the "parent-child relationship".But, newer shale wells drilled close to older wells are generally pumping less oil and gas than the older wells, according to early corporate results. Engineers warn the new wells could produce as much as 50% less in some circumstances.

The newer shale wells often interfere with the output of older wells, because blasting too many holes in dense rock formations can damage nearby wells and lower the overall pressure, making it harder for oil to seep out. The moves could potentially cause permanent damage and lower the overall amount recovered from a reservoir.

The number of child wells in the Permian now makes up 50% of all wells there and will grow steadily, according to Schlumberger. In other basins there are already more child wells than parent wells, Schlumberger estimates.

And Shale Money is Tightening…

According to the Wall Street Journal, shale money is tightening and many companies are reducing spending.New bond and equity deals have dwindled to the lowest level since 2007. Companies raised about $22 billion from equity and debt financing in 2018, less than half the total in 2016 and almost one-third of what they raised in 2012, according to Dealogic.

The loss of that lifeline is forcing shale companies—which have helped to turn the U.S. into an energy superpower—to reduce spending and face the prospect of slower growth. More than a dozen companies have announced spending reductions so far this year, even as crude-oil prices have rallied more than 20% from December lows. More are expected to tighten budgets as they release earnings in coming weeks.

Crude oil prices in the Permian region have increased since the beginning of the year as two recent pipeline capacity additions reduced some of the takeaway constraints that developed in the middle of 2018. These transportation constraints had forced producers to use more expensive ways to transport crude oil, resulting in lower received prices.

WTI Midland prices are now similar to WTI Cushing, suggesting the previous pipeline capacity constraints from the Permian region to Cushing have been largely removed.

However, I would note that the U.S. rig count has been steadily declining.

And this trend is even more evident when viewed for just this year:

Mid-Stream Projects are getting canceled…

In a sign that bigger companies are starting to have concerns, some midstream projects are being cut.Magellan Midstream Partners LP cut its capital spending outlook by $450 million over two years, saying the proposed Permian Gulf Coast pipeline was unlikely to proceed.Kinder Morgan Inc also this week exited an $800 million deepwater terminal project off Freeport, Texas, selling its stake to project leader Canada's Enbridge Inc, which continues to pursue the terminal. Kinder said the project no longer fit its strategic priorities.

Just an Item of Interest…

One issue created by the lack of pipeline capacity has been predicting oil prices in Houston.At the moment, oil markets in the Gulf coast region lack widely traded derivatives contracts, which is a potential problem for companies trying to hedge risks. At times, the price of oil at Houston disconnects from prices in the North Sea, Cushing or both, suggesting the new contracts could be useful to companies selling oil there.

Overall, the numbers do not paint a rosy picture. For more analysis, I encourage you to read this week's Ty's Take.