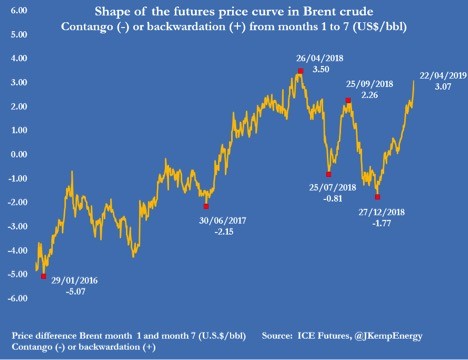 As you all know, one of my favorite times is earnings season. I find listening to the various CEOs incredibly insightful. While one must always remember that a CEO's main job is selling the company's stock, what they say can be incredibly beneficial to see how they view markets – albeit, with a bit of caution.

Some highlights from the call:

CEO Paal Kilsgraad gave his analysis of the market as follows:

Turning lastly to the industry macro where we continue to expect oil market sentiments to steadily improve over the course of 2019. Our view is backed by a solid demand outlook, the full effects of the OPEC and Russian production cuts, the slowing shale oil production growth in North America and the further weakening of the international production base as the impact of four years of under-investment becomes increasingly evident.

The recent strength in the price of crude oil, with Brent again breaking through the $70 per barrel level, is supporting this outlook. We also see clear signs that E&P investment sentiments are starting to normalize as the industry heads towards a more sustainable financial stewardship of the global resource base.

First quarter oil production in the international markets outside OPEC was down 400,000 barrels a day versus Q1 of 2018 and 900,000 barrels a day versus Q1 of 2017. While the underlying decline in the aging production base in key oil-producing countries such as Norway, UK, Brazil and Nigeria has so far been offset by new project start-ups, the need for a stronger supply side response is becoming increasingly evident.

Strong new investments are also needed in countries like Mexico, Angola, Indonesia and China where total production has been in noticeable decline for several years. Within this industry backdrop, we continue to execute our plans for 2019, targeting high single-digit international revenue growth with a business focus and capital deployment strategy as I have already outlined.

Looking at the first quarter, the growth in the international rig count, both on land and in particular offshore, the rise in the number of new project FIDs and Subsea 3 awards and a renewed interest in exploration is all supporting our outlook. Conversely, in North America land, the higher cost of capital, lower borrowing capacity and investors looking for increased returns suggest that future E&P investments will likely be at levels dictated by free cash flow.

We, therefore, see land E&P investment in North America down 10% in 2019. In addition to the lower investments, increasing technical challenges from well interference, step out from core acreage and limited further growth in lateral length and proppant per stage, points to a more moderate growth rate in the U.S. shale oil production in the coming years. The normalization of global E&P spending with increased international market investments and a reduction in North America land CapEx represents a positive market shift for Schlumberger and we welcome the return of a very familiar opportunity set given our unmatched global strength.

Mr. Kilsgaard was asked about reasonable growth rates if oil stays in the $65-70 a barrel.He responded as follows:

Well, I think if you look at where investment levels were back in the period, 2010 to 2014, obviously internationally now we are still almost around half of those investment levels. And if you were to say that the new normal is somewhere in between where we are and where we used to be, you still need multiple years of not even single-digit but probably double-digit growth in order to get back to the – even the halfway point between investment levels in 2014 and investment levels as of today.

So we still see a fairly decent runway for increased international investments. And you also see the need for this in the production declines that we are now seeing in the mature production base internationally.

Halliburton had predictable results for Q1 2019. Here are some highlights:

Here is how Halliburton's CEO characterized the current market:

What a difference 90 days make in this market. Commodity prices have rebounded, customer budgets are refreshed and we're back to work. Our results for the first quarter played out as we expected, and I'm pleased with how our organization executed both in North America and internationally… From a macro perspective, 2019 is off to a strong start. Commodity prices have been rising since the beginning of the year due to tightening oil supplies and stable demand. OPEC plus production cuts and supply disruptions from Venezuela, Iran and Libya have supported market rebalancing. Oil demand trends, particularly in China and India, have also been constructive. Overall, the macro environment remains favorable for our industry.

Against this backdrop and with winter behind us, customer activity in both hemispheres has picked up off December lows and continues to trend higher.

Now let's turn to our North America land hydraulic fracturing business. We experienced an increase in the stages pumped every month this quarter with March finishing on a high note. Overall, the first quarter activity level was modestly higher compared to the first quarter of 2018. As expected, we had pricing headwinds throughout the quarter. However, we believe the worst in the pricing deterioration is now behind us. And as we've discussed in the past, the success of our hydraulic fracturing business is not dependent on pricing alone.

In the near-term, our view on North American customer activity heading into the second quarter is shaped by the momentum that we saw building at the end of March. As for the next couple of quarters, I see demand for our services progressing modestly. The cadence of spend across basins for various companies will look different throughout the year, but Halliburton has the scale, range of services and customer relationships that capture more than anyone else out of every dollar spent in North America land this year.

Now the offshore markets are also entering recovery mode as project economics become more attractive. International offshore spending is projected to be up 14% in 2019 and the average offshore international rig count increased 29% year-on-year in the first quarter.

Finally, the third focus area for this year. We will continue to differentiate in a very important, but highly competitive space in hydraulic fracturing. The intense exploration of top-tier acreage, fueled by rapid trial-and-error technology cycles led to the explosive increase in production from US unconventionals that we've seen in the past decade. As Shale matures and operators have to step out to second tier acreage, it will become increasingly hard to add enough production capacity to replace a significant legacy decline volumes as well as drive new production higher.Going forward, higher activity and more advanced technology will be needed to maintain flat production levels in unconventionals. In light of this, I firmly believe that the future of unconventional technology will be more heavily weighted towards enabling higher well productivity.

Halliburton forecasts more completion work in the second half of the year: CEO Jeff Miller stated: More specifically around the second half of the year, a couple of ways we think about that, but I think importantly, is the production targets that are out there today, all of that require some level of completion activity to meet that… And I think the last question really be around, what do the smaller operators do going into the back half of the year? And I think they may be the most opportunistic, it's most important to them also just with the smaller asset base investing in completions really matters a lot to the value, not just of the asset, but likely the company.

On a U.S. GAAP basis for the first quarter of 2019, NOV reported revenues of $1.94 billion and a net loss of $77 million, or $0.20 per share.CEO Clay Williams provided the following insight:

Late last year we witnessed one of the sharpest and fastest declines in oil price on record as WTI fell to $45 per barrel along with rising demands from investors that oil companies exhibit more capital discipline and austerity. Oil companies responded by signaling their plans to trim CapEx and reduce activity as we entered 2019.

NOV's largest customers, the oilfield service companies that execute well construction plans for these oil companies, in trying to divine what the new year would hold, all seemed to decide that discretion is the better part of valor, and they threw the brakes on their spending for the tools that they buy from NOV.

Oilfield service companies are skilled at slashing spending during market slowdowns and our phones went quiet in December and January. Our poor first quarter financial results reflect a sharp air pocket that arose from this latest round of capital austerity following that oil price dip.